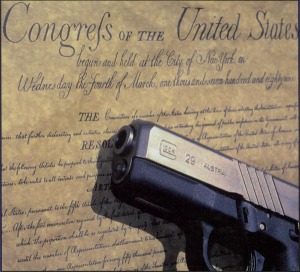 Well, they did it. The California State Senate passed AB 144 and it has moved on to the Governor. I just don’t see him not signing it either, unless there is a big enough push from the voters overwhelming his office with opposition to the bill that he has to veto it. So write the Governor, call him, or email him. Swamp his office. I have.

Also, he has to actually veto the bill for it to not become law. There is no “pocket veto” in California as there is at the federal level. If he does not sign it, it automatically becomes law in 30 days.

That may be how he decides to handle it too. Just leave it alone, and in 30 days it becomes law, and he can say that he didn’t sign it – the weasel that he is.

This bill will without a doubt be overturned in the Courts, but it may take some time for that to happen. So in the mean time, we, the law abiding citizens, we the people, pay the price and become more vulnerable in the public arena. The bill is so obviously unconstitutional that it’s amazing that the liberals in Sacramento couldn’t see it. But then, they don’t care anyway. The Constitution just gets in the way too much for them, so why not try and see if they can get away with it.

However, if the State decides to change their policy on concealed carry from “may issue” to “shall issue”, then the court may uphold the law. If the courts see that mechanism as a means to satisfy the Constitution by allowing us to “bear arms” if we just obtain a permit, then they may uphold the law. But I don’t see the liberals changing their minds on that one either.

So, in the mean time, we’re screwed. Welcome to the Left Coast.