The Most Logical Approach to Gun Ownership

I guess this has been around for some time now, perhaps about 10 or 12 years now but it still makes sense.  I received it as an email the other day and it says that Fred Maslack ‘recently’ proposed this as a bill but for as much as I can tell, he is not even still in the legislature anymore.  It has probably surfaced as a result of the recent new push for more gun control.  But it is still a great idea that came from someone in New England with a realistic head on his shoulders. 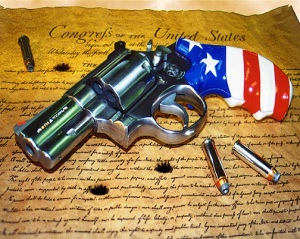 Vermont State Rep. Fred Maslack has read the Second Amendment to the U.S. Constitution, as well as Vermont’s own Constitution very carefully, and his strict interpretation of these documents is popping some eyeballs in New England and elsewhere.

Maslack recently proposed a bill to register “non-gun-owners” and require them to pay a $500 fee to the state.  Thus Vermont would become the first state to require a permit for the luxury of going about unarmed and assess a fee of $500 for the privilege of not owning a gun.  Maslack read the “militia” phrase of the Second Amendment as not only the right of the individual citizen to bear arms, but as ‘a clear mandate to do so’.  He believes that universal gun ownership was advocated by the Framers of the Constitution as an antidote to a “monopoly of force” by the government as well as criminals.  Vermont’s constitution states explicitly that “the people have a right to bear arms for the defense of themselves and the State” and those persons who are “conscientiously scrupulous of bearing arms” shall be required to “pay such equivalent.”  Clearly, says Maslack, Vermonters have a constitutional obligation to arm themselves, so that they are capable of responding to “any situation that may arise.”

Under the bill, adults who choose not to own a firearm would be required to register their name, address, Social Security Number, and driver’s license number with the state.  “There is a legitimate government interest in knowing who is not prepared to defend the state should they be asked to do so,” Maslack says.

Vermont already boasts a high rate of gun ownership along with the least restrictive laws of any state.   It’s currently the only state that allows a citizen to carry a concealed firearm without a permit.  This combination of plenty of guns and few laws regulating them has resulted in a crime rate that is the third lowest in the nation.
“America is at that awkward stage. It’s too late to work within the system, but too early to shoot the bastards.”   This makes sense!  There is no reason why gun owners should have to pay taxes to support police protection for people not wanting to own guns. Let them contribute their fair share and pay their own way.

Sounds reasonable to me!  Non-gun owners require more police to protect them and this fee should go to paying for their defense!