It’s Time To Eliminate The Gun Control Laws: Yes, All Of Them

Behavioral laws require three components to be effective.  They must accurately describe an action that causes harm to others. They must propose a penalty that disincentivizes the activity. They must be enforceable. 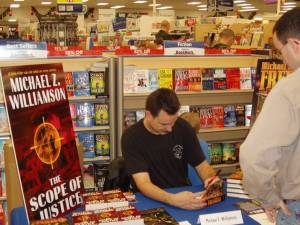 Let’s consider the laws against murder. The harm done is obvious. The penalties range up to death. They can be enforced by an examination of the evidence during trial, and punishment.

How about “disturbing the peace?” If you plug in a Gibson ES35 guitar and a stack of Marshal and Hi-Watt amps at 2 a.m. and start playing Black Sabbath’s “Iron Man,” there’s a good chance your neighbors will complain.  If they do, we have a clear report of harm done (minor harm, but relevant), and can again have an examination, trial and punishment, probably a fine.

Of course, we could prevent some of those incidences by licensing guitars, having waiting periods on amplifiers, and requiring proof of need for any amp over 20 watts.

Wait, how would that work exactly?     And why should we exercise prior restraint on an otherwise lawful activity?  How would a waiting period stop anyone from blasting the neighborhood?

Let’s look at a global issue, and management: Driving.

Most nations have speed limits in various areas, typically from 25-35 mph in residential areas, and typically from 55-100 mph on rural highways, depending on traffic load and conditions.  Stop signs are almost universal, as are yield signs. Traffic keeps to one side unless passing.  Cars have brake lights, headlights and turn signals. Most nations will let foreigners drive on their own nation’s license. You can go between the US, Canada and Mexico and the rules are fundamentally identical. Europe’s are not dissimilar. Parts of the old Empire and Japan drive on the opposite side, but that’s adaptable.  Driving laws on the whole suit a consensus of what is reasonable, and serve valid purposes in reducing and preventing accidents and damage.

We’ve had guns for 800 years. It would make sense, then, for firearm laws to be as consistent and uniform across the world.

Before getting into that, what other 800 year old technologies are restricted from the populace?  We don’t restrict printing presses and broadcast, despite the obvious incidents caused by their unfettered use. Generators don’t require licensing to own, nor do steam engines. There are occasionally laws against knives, which are sharpened pieces of metal, and it’s obviously a lost cause to ban the fabrication of something so basic. Guns are slightly more complicated, but can be mass-produced using cheaply available machinery of the 19th century. Why have we deemed such a basic tool to be some sort of mystical demon?

The U.S. has a category of weapons called “Curios and Relics,” weapons of historical value and interest. The Russian SVT 38 and 40 rifles fit the definition of this category, and weapons contemporary with them are readily available.  The SVTs, however, are banned from import. Yet, in neighboring Canada, with theoretically stricter laws, those rifles are unrestricted from import.

Most countries ban suppressors (“Silencers”), but some encourage them for hunting. In the UK, once one has a firearms certificate, the suppressor is unregulated. In New Zealand, they are completely unregulated.  In Canada, they are banned. In the U.S., they require registration and a $200 transfer tax.

One of the more glaring examples is in “Deactivated” weapons. An M16 properly deactivated in the UK, for display and collecting, has the barrel destroyed internally and plugged, breech welded and or cut, the bolt face cut and welded, and the firing pin disabled.4 Yet, in the US, it would still legally be a machine gun, since the receiver is intact. Conversely, the US would require torch cutting or crushing of the receiver, which leaves the bolt and barrel intact, thus making them firearms under U.K. law5.

Where guns are banned, people still acquire them: https://amodestpublication.wordpress.com/2009/05/08/loyalist-paramilitary-improvised-machine-guns/

Many countries prohibit people owning firearms for the legitimate use of self defense, but permit them for “sport” and “hunting.”  In other words, guns are too dangerous for you to use for their intended purpose, but perfectly okay to play with.

And then there’s the State of California, with laws that are beyond Byzantine: http://www.calguns.net/a_california_arak.htm

The wild inconsistency and observable illogic of these laws reveals them for what they are: Hysteria-driven reactions to panicked demands to “do something” about “gun violence.” As if guns can commit violence–reference Switzerland vs Japan.

In California, offering an illegal “assault weapon” for sale without even actually using it is as severe a crime as raping a police officer6,7.

Alcohol, which serves zero non-medical needs, is involved in more crimes than guns, and in many crimes involving guns. Half of all crime, in fact.  Yet we understand what happened when we attempted to ban booze.  I have had people insist to me that alcohol serves “legitimate social functions.”  If you believe that reducing inhibitions and judgment is legitimate, I won’t argue with you.  You know you’re wrong and are being defensive.  You most certainly have a right to consume it, but it’s not a consequence-free act.

Stepping into sensitive zones, AIDS kills as many people each year as die from gunfire. Half of all AIDS deaths still come from unprotected gay sex. With gay men being perhaps 2 percent of the population, that means they cause twelve times the deaths per capita compared to gun owners8.  But suggest “reasonable” laws regarding gay sex–mandatory condom usage and education–and you’ll be called names by a horde of angry, mouth-foaming “liberals.”

Canada has learned slightly.  After tremendous expense, they admitted their firearm registry was a complete failure and largely abandoned it9.  They also “Fixed” the “problem” of hollow point defensive ammo:

1. Importation of hollow-point handgun ammunition is governed by the Explosives Act.
2. “Safety cartridges” (ammunition) come under the Act, but are generally exempt from almost all provisions.
3. Many years ago, citing the Hague Convention (which only relates to bullets used by soldiers in war), some dolt in the Explosives Branch put a ban on the importation of “hollow-point handgun ammunition” in place, by classing each such cartridge as a “prohibited explosive.”
4. The importation of hollow-point rifle ammunition is not prohibited — say, for the .44 Magnum Ruger rifles, the .357 Magnum and .38 Special and 9mm and .40 Marlin rifles, .22 rimfire rifles, etc., etc. — so many people have imported hollow-point rifle ammunition in those calibers. Sometimes, they have been required to attach a little sticker to each box of cartridges, saying “For use in rifles only.”
5. The sticker has no effect. Once the ammunition has been legally imported, it comes in as a “permitted explosive” which is not and cannot be a “prohibited explosive.” That being so, it cannot be retroactively made a “prohibited explosive” by a person loading it into their handgun.

Therefore, ammunition in boxes with that sticker can legally be fired in handguns, because the only possible charge is possession of a “prohibited explosive” and both the Explosives Branch and Canada Customs certified that each cartridge in the shipment was a “permitted explosive” and not a “prohibited explosive” in order to let them into Canada. It is not possible to prosecute a person for using hollow-point ammunition in a handgun because they would be found innocent as a result of “official misdirection.” (Points and references here: 10)

Maryland has realized their ridiculous notion that fired cases in a database could ever be relevant to a criminal investigation was flawed, after it never helped solve a single crime11.

The recent catchphrase is some variation of, “Well, you gun nuts need to come up with something, because doing nothing is no longer an option.”

In response:  People who make this statement have been doing “something” for over 150 years, to the tune of 20,000 federal, state and local laws. Despite all that, they are insisting “nothing” has been done, an admission that they believe it was all worthless, pointless and to no effect.

They are absolutely correct.

First, that people with no knowledge of the subject shouldn’t be attempting to create legislation.

Second, that all those laws should be repealed.

Michael Z. Williamson is an author who specializes in science fiction. An Air Force veteran, he has served all over the world. He enjoys historical re-enactments, writing, reading, hiking, climbing, shooting, archery and the martial arts.