Gun Control Laws Should Be Repealed

If you take a look at the more than 13,550 gun laws we have in the United States including federal, state and local laws, I defy you to find even one that has saved a life, prevented a crime, prevented a mass murder or political assassination. It can’t be done. Gun Control laws do not save lives or make people safe. To the contrary, they make people less safe by denying them the ability to defend themselves from predation.  So now they want what they like to call “Common Sense Gun Laws”.  There is no such thing.  They all make citizens less safe.

Most gun laws on the books today are there as a result of an emotional, irrational over reaction to some tragedy or sudden perceived threat.  None of the laws are based on Constitutional Law, or are consistent with overall dominant public opinion. Each and every gun control law is Unconstitutional by     END_OF_DOCUMENT_TOKEN_TO_BE_REPLACED

Well, that didn’t take long.  I thought it would be at least Monday before we heard from the politicians, but I guess I forgot about the Sunday TV shows. In my post from Friday, just two days ago, I predicted that it would be 2-3 days tops before we heard about the assault weapons ban.  And since then, all of the usual suspects have been coming out of the woodwork calling for everything from magazine size restrictions, to banning internet sales of ammunition and now the ever popular “assault weapons ban”.

Feinstein faced off on the gun control issue with Ron Johnson, Republican Senator from Wisconsin, on Fox News Sunday wherein she said, “Weapons of war don’t belong on the street.”  The Senator from California argued that the Federal Government should put a ban on rapid-fire weapons and large magazines.  She further said, “We’ve got to sit down and really come to grips on what is sold to average citizens.”

Senator Johnson insisted, “This isn’t an issue about guns.  It’s about a sick, demented, evil individual.  I don’t think there’s a solution for that in Washington.  We need to look at families and the education system.” He further said such legislation would do little to curtail mass killings but would instead “reduce America’s freedom.”  Senator Johnson argued, “This isn’t an issue about guns, this is really just an issue about sick, demented, individuals. I don’t think society can keep demented individuals from obtaining any type of weapon the want to kill people.”

Senator Feinstein continued with her rant on large magazines and military style assault rifles saying that it is time to re-instate the ban.  But Senator Johnson re-iterated, “We are talking about basic freedoms, and the Constitution’s Second Amendment and I am a strong defender and believe in that”.
He said, “I would hate to see a tragedy like this used to promote a political agenda to reduce American’s freedom.  Enough of our freedoms have already been taken away.  We don’t want to lose any more.”  Thank you Senator Johnson for your common sense approach.  It is unfortunate that we can’t get liberals like Diane Feinstein to understand the logic.

But liberals have no faith in families.  They believe that government is the only answer here because we are incompetent at teaching our children about life issues.  What’s more, we used to have rifle marksman classes in most of our high schools, but not anymore.

Yesterday, Senator Frank Lautenberg, Democrat from New Jersey, told the Huffington Post that he already has legislation ready that he plans to introduce for that will ban the sale of magazines that hold more than 10 rounds.  And today he made the ridiculous comment, “No sportsman needs 100 rounds to shoot a duck.”  No shit Sherlock.  We use a shotgun instead.  Unfortunately, he plans to introduce his legislation this next week just the same.

Yesterday too, New York Mayor Michael Doomberg started making demands that both of the Presidential candidates need to outline their policies with respect Federal gun laws.

And so it begins.

“Let no tragedy be wasted that could further our liberal agenda.” – Liberal mindset

Dateline: Aurora, Colorado, July 20, 2012 – A gunman dressed all in black and wearing a gas mask massacres 12 people attending a midnight premier showing of the “Batman, The Dark Knight Rises”, and injures at least 50 more at the Century Theaters in Aurora.  This was also in a place that is a “Gun Free Zone”, as Century Theater posted a “No Guns Allowed” sign on the front doors.

Yet another tragic mass shooting, this time involving what appears to be an otherwise sane person by all initial accounts, who for some unknown reason shot theater goers in the Rocky Mountain metropolitan city of Aurora, Colorado.

As usual the media jumped right in with its usual slipshod, inept attempt to investigate the incident and the shooter that only resulted in journalistic malpractice.  Early Friday Brian Ross with ABC News checks out the name James Holmes on his I-Phone and finds one of the James Holmes listed is an active TEA Party member, so he gleefully reports that he is the “Batman Killer”.  Oops!  Didn’t check his facts again.  Turns out he wasn’t the same guy.  Just the possibility that the TEA Party could be tarnished and tied to this was enough to send Brian Ross into a frenzy and report to the world that the Batman Killer is a major TEA Party member.  He later had to apologize.  But I digress.

The next words out of the reporters mouths was that the gunman was carrying an “assault rifle” thought to be an AR-15 that shoots high velocity ammunition along with a pistol and a shotgun, that were bought “legally”.  Now the word “legally” is added strategically.  Their agenda is to put blame on the 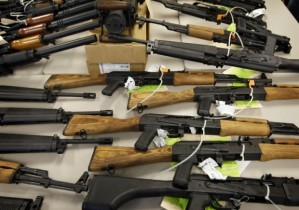 guns that are ‘so prolific’ in our society – in their minds.  And the fact that someone could buy what they call an assault rifle legally is undoubtedly going to be brought the forefront in the media reporting in the next few weeks.  Journalists are no doubt chomping at the bit at the notion that they are going to be able to start calling for more gun control, more extensive background checks, new gun laws, waiting periods, gun limits and wait for it – a renewal of the “assault rifle ban”.

Yes, an “assault rifle ban” just like the one that expired in the ‘90s.  After all, their mantra is “let no tragedy be wasted”.  They’re not going to let this go unanswered.  In a press conference this afternoon, the Aurora Police Chief said that it now up to us to now start “pushing back”.  Pushing back??  What the hell does that mean?  I’ll tell you what that means.  They are going to start the call for more gun control laws.  Liberal legislators are going to be more than eager to answer the call.

So let’s just see how long before we see the first news report on calls for new gun legislation.  I give it two – three days tops.  After all, it is a weekend coming up.