In two previous posts I have been warning that the primary reason Obama would commit treason such as he has with Operation Gun Walker (or Fast and Furious) and arm Mexican Drug lords, was so he would have reason to try to pass more gun control legislation.   Well today I hear that the liberal democrats in Congress are planning to introduce new gun control legislation today.

In an article by Katie Pavlich for the The Town Hall, she claims that several Democrats announced yesterday that they are planning to introduce new legislation today that is designed to “keep high powered firearms out of the hands of dangerous criminals, including the Mexican Drug Cartels”.  However, the legislation which is called the “Stop Gun Trafficking and Strengthen Law Enforcement Act”, will do no more than punish law abiding citizens and trample our Second Amendment Rights yet again.

Excuse me?!  It was the Obama Administration that allowed the drug cartels to freely purchase the “high powered firearms” in the first place.  The FBI and ATF all but forced the local gun sellers to complete the transactions against their own objections. Obama even funded the operations with money from the stimulus bills.  Problem is, he was hoping we wouldn’t find out about it.

And just as we predicted, here come the liberals with marching orders from President Obama, using it as a reason to gin up support for more gun control laws, with bills in hand. No gun control law is going to keep firearms out of the hands of the Mexican Drug lords, or any other criminal for that matter.  In fact, there is another blogger who has it stated another way:

“There are more than 22,399 restrictive gun laws in force. Of those, not even one has ever reduced crime.  In fact, crime has increased after each of these laws, and the amount depends on the severity and level of enforcement of the law.”

And it especially doesn’t matter how many gun laws we have if the Federal Government is willing to break them their selves to push a political agenda.  This must be what President Obama meant when he comforted anti gun members of his own party by saying, “we are working under the radar” on new measures.

House Representative Carolyn McCarthy who authored other gun control legislation earlier this year, is joined by Elijah Cummings, Carolyn B. Mahoney, to lead this new push.  And it will be a push in which they spare no effort to get it passed and signed.

It is time to contact your representatives and let them know you’re dissatisfaction with the legislation.

With rumors, innuendo, accusations, and Congressional hearings prominent in the headlines over the Project Gunrunner scandal, we now hear that the Mexican Drug Cartels are still finding all of the guns they need to keep themselves well armed and deadly in Mexico.  Only this time, they are getting their guns from Central America.  President Obama is claiming that a “lack of gun control laws is the problem”. 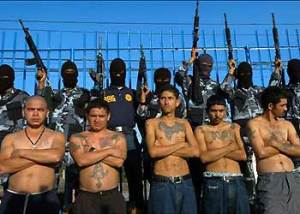 It is illegal for the citizens of Mexico to own or possess guns larger than a .22 but that does not stop the criminals from obtaining all the guns they need.  Since the only guns in Mexico are in the hands of the government or the criminals, Mexican citizens have no way to defend themselves against the drug lords.  More and more citizens are supporting the drug cartels as the healthier way to live among them.

Some of the weapons siezed from the Drug Cartels

hands of Mexican drug runners and criminals, all while the guns they are purchasing are coming from Central America and not the United States.  The guns they are now getting from south of their border are even more sophisticated than the ones that Obama was able to supply them.  Illegal gun dealers providing their market are able to provide fully automatic weapons (machine guns), rocket propelled grenade launchers (RPG) and even land mines – none of which would be available in the U.S.  The best they got from the U.S. were semi-automatic weapons.

In addition to the heavy arsenal that is now proliferating in Mexico, drug

cartels are constructing homemade, armor plated, personnel carriers and tanks with as much as 1” thick steel plating.  Many times these vehicles resemble Civil War-era Ironclads on wheels.  These narco tanks, often called “monstruos” or “monster trucks”, look like a cross between a Somali “technical” and something out of a “Mad Max” movie.

Some of them can do 60 mph and drop, James Bond style, nail popping nails or oil slicks to slow down pursuers.  Again Mexican President Felipe Calderon is blaming the United States for manufacturing pick-up trucks and sport utility vehicles that can be made into these bullet impervious vehicles.

Project Gunrunner was a scheme devised by the Obama Administration to allow the Mexican Drug Cartels to purchase guns here in the U.S. against the better judgment of local gun dealers in a hair brained idea that they would be able to track them into the hands of drug dealers south of the border to see where they end up.  Gun dealers here in the U.S. who resisted were pressured by the FBI and BATFE in to allowing the transactions to occur.

However, no tracking was ever achieved under this failed plan, other than the fact that at least one weapon that was used to shoot and kill an agent of the United States has been recovered.  The guns were lost into the bowels of Mexico.  Obama is now trying to blame the U.S. gun dealers and the “lack of gun control laws” for the incident, and as a result, liberals in Congress are now calling for a re-instatement of the “assault weapons ban” of the mid 90s and stricter gun laws for the States that border Mexico.

The idiocy of the Obama administration continues to amaze me as the lengths to which they will go to bring us closer to a socialistic state.  Health care was the first major step into socialism.  Now if they can only get the guns out of the hands of the citizens they will have little problem running roughshod over the country.  Americans need to wake up vote against liberalism at every opportunity.  Whenever you see a candidate on the ballot with “D” after their name, vote for the other guy, whoever it is, and help to save our country.