What Does FMJ Stand For?

I was recently at a store looking for some ammunition I needed when a young new enthusiast approached me and asked, “What does FMJ stand for?”  I politely told him that FMJ stands for Full Metal Jacket where they coat the outside of the lead bullet with a harder metal such as copper or brass.  That then prompted him to ask a follow up question, “Why do they do that anyway?”  I knew this was an opportunity to impart some knowledge and provide a little bit of education.

To be truthful, I did not go into as much detail there in the store as I could have, I just gave him the short answer, given that it really was not the proper forum.   But in so much as this might be a more appropriate forum; I am going to start at the beginning.

The birth of our country was won in a war we call the American Revolution.  We prevailed over soldiers of the English army using long rifles that used black powder to propel lead shot balls toward their target.  Black powder was the technology of the day and it served its purpose. In the mid 1800s we began developing cartridge based ammunition that encapsulated the gun powder in a metal casing that held the lead shot as well.  It revolutionized firearms making their use much easier and faster.

Then, near the end of the 19th century, smokeless powder was developed.  There were many advantages to the new smokeless gun powder, first and foremost is the extreme reduction in the amount of smoke it produced.  But along with that, smokeless powder generated much more perceived power through greater pressures.

Suddenly, the same lead projectiles that used to leave the barrel at 800-850 feet per second were traveling at 1100 to 1500 feet per second and more using the same amount of powder.  Muzzle energy and impact energy was nearly doubled.

One thing that was discovered as a result was that when muzzle speeds approached 1100-1150 fps and more, it actually was so fast that lead bullets would begin to melt from the friction as they traveled down the barrel.  That melting would cause small particles of lead to be deposited in the barrel.  As more and more lead residue was left behind, the accuracy of the rifle was greatly reduced. 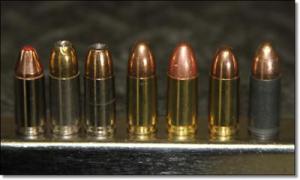 Not all of these 9MM rounds have a “Full” metal jacket – only the round nose ones.

So in an effort to keep the lead bullets from melting, they came up with coating the bullets with another harder metal that would not melt so easily, such as copper or brass.  The bullets were then “jacketed” in another metal.   Fully covered it was a “Full Metal Jacket” or FMJ. 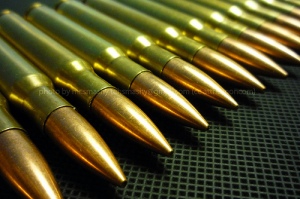 So after all that, FMJ simply stands for Full Metal Jacket, which means the lead bullet has been coated with a jacket of a harder metal, usually copper or brass.

The California Fish and Game Commission is considering a state-wide ban on the use of lead ammunition for hunting making it illegal for the Gun Enthusiast to hunt with lead ammunition.  Two years ago they were successful at banning lead ammunition in areas inhabited by the California Condor with AB 821 that was signed into law by the governor.   Now through their hunting regulations, they have extended the ban to include .22 rimfire ammunition in the condor habitat.   This incremental approach puts them in line to extend the ban to the State’s borders, which they are considering now.

Proponents of the current ban have wanted a state wide ban from the very beginning.   The California Condor simply provided an excuse to implement a smaller version of the law to get us used to the idea.  The anti-hunting and anti-gun extremists now are pushing to extend their little ban to prohibit all Gun Enthusiasts from using the less expensive lead ammunition for all purposes whether hunting or target practice statewide.

Lead is a natural element that comes from the earth.  It is an element that all humans and animals alike require in their bodies, to a small extent.  However, large enough quantities can cause lead poisoning.  But it is ridiculous to make us believe that condors are likely to eat spent lead ammunition in the first place, thereby causing them to get ‘lead poising’.   But this is the premise that made it possible for the anti-gun lobbies to garner favor with the Fish and Game Commission and convince them to enact this preposterous regulation.  But now they are going for the entire State.

There is no scientific evidence that lead ammunition is causing lead poisoning in condors or any other animals.  Similarly, there is no evidence that lead ammunition is a risk to human health or the California environment.  What is evident is that a small group of extremist activists, who have friends on the Commission, will not stop until they successfully remove some more of our freedom and make the most affordable and ballistically superior ammunition illegal to all Gun Enthusiasts.   They know the damage that this will do to hunting interests in the State.  Further, it is a loss of freedom that we will never get back if they are successful at extending the ban on lead ammunition to cover the entire state.

Californians are encouraged to call and write Fish and Game Commission and request them to oppose all efforts to extend the ban on lead ammunition.  I personally feel we should also request that they rescind the current ban covering the condor habitat.